As Chairman of the Board for Ocean Thermal Energy Corporation (OTEC), Jeremy invested in a technology that will help solve three of the world’s most pressing problems: shortages of clean water, reliable, affordable energy, and sustainable food production solutions for an ever-increasing global population. Jeremy was successful in establishing subsidiary organizations in The Bahamas and U.S. Virgin Islands and organizing a three-year study that proved OTEC’s technology could work in the Caribbean region. Jeremy arranged over $30 million in private equity/debt instruments, negotiated more than $100 million in senior debt project financing, and obtained a public listing in the US.

Jeremy has established the OZFund, Inc. The objective of the OZFund is to take advantage of the Opportunity Zone program, created as part of the Tax Cuts and Jobs Act of 2017 to encourage long-term private investments in low-income urban and rural communities nationwide. The opportunity zone program is intended to stimulate economic growth in distressed areas by providing tax benefits to investors. The OZ Fund’s first project is underway.

In 1992, Jeremy founded Medical Technology & Innovations, Inc. (MTI), and served as its Chairman and CEO through 2006. MTI notably developed and built a vision-screening device known as The PhotoScreener, which was designed to detect eye disorders in preverbal or difficult to screen children.  Multiple peer-reviewed studies concluded that: The examination of children with severe learning disabilities for refractive errors can be extremely difficult. The MTI PhotoScreener is an effective means of screening such children and young adults for refractive errors and strabismus so that the children with these abnormalities may be targeted for a more detailed evaluation. Under Jeremy’s leadership, MTI distributed its PhotoScreener all over the world and established a distribution and technical support subsidiary in the UK. MTI successfully listed as a public company in the US.  Along the way, MTI acquired two companies, adding additional medical devices and products. MTI later sold the distribution rights to the PhotoScreener to a major eyewear company. 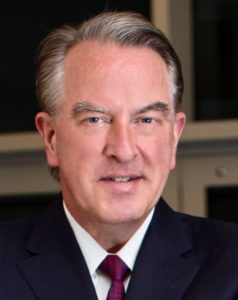 Gerald is a U.S. lawyer with over 30 years of experience in international legal, business and government expertise. He has specialized knowledge and experience in federal contracting, domestic and international business, government relations, financing and information technology. His previous government experience includes service as a member of President Ronald Reagan’s White House Staff. A graduate of the United States Military Academy at West Point, New York, he served as a helicopter pilot with the U.S. Army.